Being Bicultural: Identity and Belonging among 1.5G and 2G Russian Immigrants in Finland 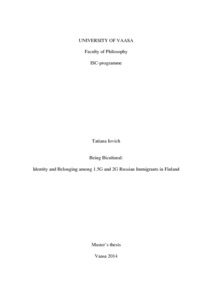 Due to immigration and international mobility, the phenomenon of biculturalism is no longer a novelty. There is an extensive amount of research dedicated to the identity of the first generation immigrants particularly in countries with old traditions of immigration. Finland is considered a relatively new immigrant country. This study aims to examine perceptions of identity of adult children of Russian immigrants in Finland. Some of them are second generation immigrants (2G), while others moved to Finland at an early age and can be referred to as one and a half generation immigrants (1.5G). Besides, Finland and Russia create a specific context for the analysis due to the fact that these are neighboring countries with a long and not always amiable history that has affected their relations.

A qualitative approach is employed in the current work. A theoretical part comprises identity-related theories with the focus on biculturalism within immigration setting. A combination of holistic narrative and thematic methods was used for analysing the data which was collected through nine semi-structured interviews with adult children of Russian immigrants.

The findings uncover individuals’ diversified experiences of growing up in two cultures as well as different understandings of being bicultural. Most of the individuals acknowledge their dual identity and consider themselves bicultural. Moreover, they appreciate being a part of both cultures and find it beneficial. However, while some of the interviewees demonstrate their orientation towards one culture, others position themselves between and/or neglect a necessity to tie themselves to either of these cultures. In the latter case, they use the concept of European and multicultural identity.