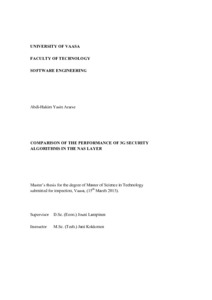 Cryptographic functionality implementation approaches have evolved over time, first, for running security software on a general-purpose processor, second, employing a separate security co-processor ,and third, using built-in hardware acceleration for security that is a part of a multi-core CPU system. The aim of this study is to do performance tests in order to examine the boost provided by accelerating KASUMI cryptographic functions on a multi-core Cavium OCTEON processor over the same non-accelerating cryptographic algorithm implemented in software.

This work illustrates the potential that up to sixteen cnMIPS cores integrated into a single-chip OCTEON processor provides for HW- and SW-based KASUMI implementations.