PUBLIC SECTOR MARKET ORIENTATION IN FINLAND AS A PROCESS OF PRIVATIZATION: A CASE STUDY ON FINAVIA AND THEIR COOPERATION WITH FINNAIR 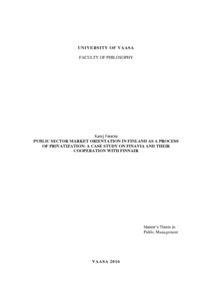 Background of the study: Market Orientation has become very popular in business profitability, though in public sector it has different use. This term turned into privatization by orienting public sector reform, process outsourcing, and transfer of public goods to private companies. After Second World War, from giant public organizations to medium enterprises tried to build strong public sector to ensure maximum public satisfaction in terms of welfare service. The research is based on how public organizations have opted for privatization as a process of market orientation.

Research problem: To accommodate the term “market orientation” into public services, considering the bureaucratic aspect. Finnish public sector is equally successful as private sector, therefore the extent of needing privatisation is being debated alongside the reasons behind adopting this approach. This thesis will try to disclose the reasons of market orientation by analyzing incorporation in Finavia and will highlight the results of the analysis.

Theory/central concepts: The research has been inspired by worldwide used phenomenon “Privatization”. This term has been very substantial from country to country in this globalized periphery. After successful implementation at policy level of first world countries, it is also influencing third world nations as well. Though there are many bureaucratic challenges, orienting some development factor like reform regions like Asia is also privatizing government services to ensure service efficiency and making public sector more profitable. Major part of theoretical study of this thesis is built up on new public management, public choice theory and incorporation process. For organizational structure new concept of hybrid organization has been analyzed.

Method and material: To meet the research objectives, qualitative research method has been used and interview method was followed. Different books, reports, journals and other published materials were utilized during this research. Finavia and Finnair were used as case study. An elaborate relationship between these two organizations have been discussed among the key findings of this research.

Findings and results: This thesis has disclosed the benefits observed in Finavia after incorporation and also has pointed out the challenges. This research has visualised the reasons of incorporation and the changes within the organization and it has also focused on the customer relationship as a result of incorporation. The findings will help the readers to determine the necessity of market orientation.