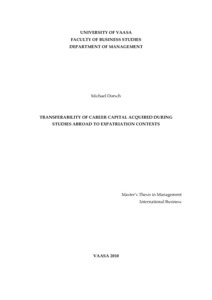 Through increasing globalization the skills needed for success in today's world differ from those needed only 15 years ago to pursue a successful career. Many companies are searching for employees with international skills and a cosmopolitan and global world‐view. Hence, graduates need an education that enables them to compete in global markets, since many of them might work in an international context or even abroad for some time during their career. Study periods abroad are considered as a possibility to acquire cross‐cultural abilities necessary for a successful career in today's globalised world. Over the past two decades an increasing number of students decided to study in a foreign country. It can be assumed that those former internationally mobile students can benefit from their experience gained during studies abroad and transfer these skills to expatriation contexts. Therefore, the aim of this research is to capture the developmental aspects of such study periods abroad on the career and career capital development of graduates, and the transferability of these skills to expatriation contexts.

A qualitative research design has been chosen for this study to capture a richness of information on the career competencies of former internationally mobile students. Data was collected during ten semi‐structured interviews, which were recorded and fully transcribed for analysis.

The main findings of this research suggest that studies abroad have a strong effect on the development of career capital. They increased the participants' language skills, lead to the acquisition of intercultural competences, and increased their self‐confidence. Generally, it seems that studies abroad were an important factor for students to seek for international jobs. When it comes to the transferability of the acquired career capital, mainly so‐called soft skills and language skills could be utilized during expatriation. Previous experience of living abroad also facilitated integration.