The conceptual origins of managerialism: A review of the beliefs and practices in the public administration literature 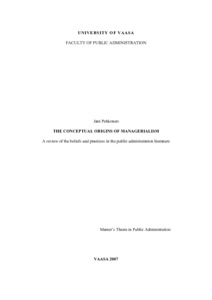 This study examines and discusses the concept of managerialism and related themes and phenomena such as new public management in the context of the administrative reforms of the last decades. So far, the theory of managerialism has remained relatively undeveloped and various conceptualisations vary signifi-cantly and thus a possibility for creating new knowledge and a basis for theory exists.

The research problem is threefold: 1) What is meant by managerialism? 2) What kind of form does man-agerialism take as it is examined as a belief? 3) What kind of implications are associated to managerial-ism in the context of practical administration and management activities? To answer these research prob-lems, the study takes a qualitative approach and examines selected conceptualisations of managerialism and identifies, examines and discusses various managerialist approaches and practices in the context of scientific literature mainly from the 1990’s and the second millennium.

The results show that managerialism has become a category into which a large number of approaches and methods are placed. It is used in connection with administrative reforms in the context of new public management, and there seems to be a consensus that it involves import of techniques and approaches utilised in private sector to the public sector and that it is connected with improving efficiency and effec-tiveness of public sector organisations. However, perceptions differ in terms of the purpose and conse-quences of managerialism. While others see it as a reaction to changes (e.g. globalisation) and a tool for defending the welfare state, others perceive that it is a driver of change and a tool for introducing market-oriented, neo-liberal political rationality to the public sector.

The academic debate and discussion on managerialism and the administrative reforms has included a great amount of ideological postulating. While at the other end of the extreme some suggest a far-reaching right-wing plot to undermine welfare state and advance neo-liberal worldview, others on the opposite side embrace the market analogy unconditionally despite of the existing compatibility problems. The study revealed a vast network of interconnected ideas woven around the central ideological currents of European history from the Enlightment through modernisation of state to contemporary, postmodern époque. It would appear that underlying managerialism exist themes connected to liberalism, individual-ism, suspicion of extensive regulation, negative view on traditional bureaucracies, continuous develop-ment and optimisation of organisations and economic rationalism.