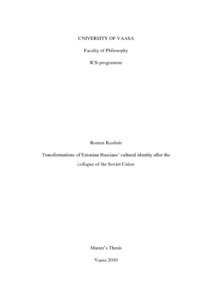 After the fall of the USSR the cultural identity of Russians in Estonia has experienced drastic changes. This study analyzes and systematizes these transformations within Manuel Castells‘ theory of resistance and project identity. Also the role of the media in identity construction is analyzed. The concepts of resistance and project identity are central to this research. Besides Manuel Castells‘ scheme the main theoretical framework includes Bernhard Giesen‘s concept of the media as identity constructor. Manfred Beller‘s notion of image, Geert Hofstede‘s theory of culture, and Stuart Hall‘s view of cultural identity are applied as supportive theoretical perspectives.

The primary sources are media materials from Estonia and Russia. For their analysis Norman Fairclough‘s critical discourse method is used. The secondary sources consist of the materials on history of Estonia, Russia and the Russian minority in Estonia.

This study also revealed that both identity models have their problems. Resistance identity faces the suspicion of Estonians while project identity is also not always accepted as loyal to Estonia. At the same time project identity is more likely to solve the problem of the Russian minority in Estonia.