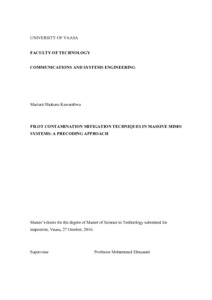 A massive MIMO system comprises of base stations with a very large number of antennas serving a considerably smaller number of users and providing substantial gains in spectral and energy efficiency in comparison to conventional MIMO systems. However, these benefits are limited by pilot contamination which is caused by the use of training sequences for channel estimation. This negative effect has given rise to various research works on schemes to mitigate pilot contamination and among them are precoding techniques.