Is LEO-Based Positioning with Mega-Constellations the Answer for Future Equal Access Localization? 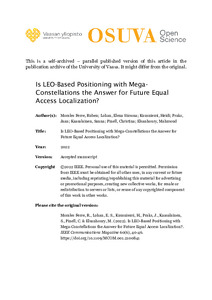 vertaisarvioitu
©2022 IEEE. Personal use of this material is permitted. Permission from IEEE must be obtained for all other uses, in any current or future media, including reprinting/republishing this material for advertising or promotional purposes, creating new collective works, for resale or redistribution to servers or lists, or reuse of any copyrighted component of this work in other works.

Capital expenditures and indoor challenges are two of the main obstacles toward equal access positioning services worldwide. Global Navigation Satellite Systems (GNSS) do not function well indoors and in some challenging outdoor scenarios, such as dense forest canopies or hilly terrains rich in vegetation due, for example, to multipaths and low carrier-to-noise ratios. Terrestrial solutions nowadays can be used to complement GNSS, but they are typically costly to deploy with high coverage and do not offer equal access, for example in some low-revenue countries, in regions forbidding wireless 5G access due to health concerns, or in areas hard to reach with terrestrial infrastructure, such as deep jungle, desert areas with sandy dunes, and deep valleys/deep canyons. As many low Earth orbit (LEO) mega-constellations are emerging and their satellites are significantly closer to Earth than GNSS satellites, solutions based on LEO could complement GNSS. LEO-based communications are expected to be widespread in the next decade, and they will offer a global and easy-to-access infrastructure, with the main costs to the end user coming from the receiver equipment. It is our assumption that future wireless receivers will support the integration of terrestrial and satellite infrastructure, and thus, the LEO-based positioning tasks could be mainly implemented as software add-ons on existing future receivers. Nevertheless, closer proximity to Earth does not automatically mean stronger received signals or acceptable positioning accuracy, especially when the carrier frequencies of the new LEO signals are higher than those in GNSS. Here, we present a feasibility study of LEO-based equal access localization by looking at the current opportunities, benefits, and challenges of LEO megaconstellations used as signals of opportunities. We show that there is an unharnessed potential of future LEO megaconstellations for equal access localization, although several challenges are still to be overcome.