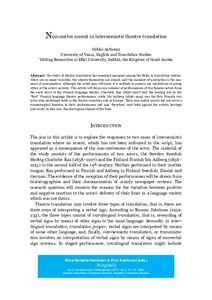 © 2020 Department of Finnish, Finno-Ugrian and Scandinavian Studies, University of Helsinki, and the authors

The study of theatre translation has remained marginal among the fields in translation studies. There are so many variables, the objects themselves are absent, and the moment of production is the moment of consumption. Although the script may still exist, it is unlikely to contain any indications of acting styles or the actors’ accents. This article will focus on a number of performances of two famous actors from the early years of the Finnish language theatre. Charlotte Raa (1838–1907) had the leading role in the “first” Finnish language theatre performance, while Ida Aalberg (1858–1915) was the first Finnish star actor who performed both in the Nordic countries and in Europe. Their non-native accent did not serve a dramaturgical function in their performances and was, therefore, read both against the artistic heritage and world, in this case, the ideological climate of the time.