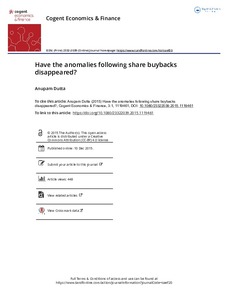 vertaisarvioitu
©2015 the author(s). This open access article is distributed under a Creative Commons Attribution (CC-BY) 4.0 license.

Although several empirical studies report significant positive long-run abnormal stock returns following share buybacks, a recent event study paper claims that such anomalies have disappeared in the most recent decade and this disappearance of abnormal performance is not sensitive to the methods used. The present paper makes an attempt to investigate this claim using 63 Indian share buybacks which took place between July 2008 and June 2012. We consider the application of several event study methods and our findings are a bit mixed. We conclude that the long-run anomalies following stock repurchases in India are still sensitive to the employed methodologies.