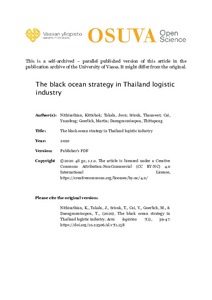 The logistic is the core of Thai economy. While many business authors are focused on blue ocean strategy in pursuit of tapping into uncontested market space by using differentiation and low cost. There is another strategy that are most commonly use but not much revealed in the literature. It is named black ocean strategy and commonly use in logistic industry. It is the secret mantra from the past which still widely use in today business world. This paper has focus on used car sector as a part of logistic industry to study the viable of this strategy and found that black ocean is commonly used by used car companies. Since the automotive tax in Thailand is pretty high many logistic companies prefer to go for used car which is more economy. The study found that black ocean strategy is the viable tools to reduce the purchasing cost as well as increase the selling price for both logistic buyer and purchaser.