VALUE CREATION THROUGH FOREIGN ACQUISITIONS : An Empirical Analysis on FDIs by Finnish Firms 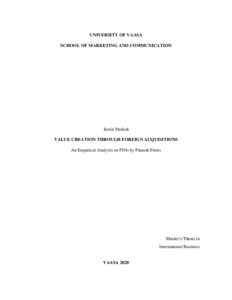 Large multinational firms from European countries such as Finland have been engaging in FDIs to expand their business and generate higher value creation. However, scholars are still divided over the presumption, that FDIs and especially the announcement of FDIs leads to higher value creation for acquiring firms.

In this thesis, this ambiguity is investigated for Finnish acquiring firms by examining the stock market reactions on the announcement of FDIs. Additionally, the impact of various investment and target country related factors and their interaction effects on the potential value creation is analyzed. The empirical test is conducted in an event study, based on a sample data of 150 foreign acquisitions made by Finnish firms in the period of 2007-2018.

The results indicate that, regardless of overlapping events occurring within an event window of (10,+10) days, the announcement of an FDI does, in fact, on average have a significant positive impact for shareholders of Finnish acquiring firms. Moreover, very small-sized acquisitions, acquisitions financed by a mixed payment method, fully acquired foreign targets that are financed by cash and located in (politically) low-risk countries lead to positive significant value creation.

However, acquisitions directed to high R&D-intensity fields, relatively large and large sized acquisitions, foreign units that are partially acquired, financed by stock and located in developing countries indicate insignificant value creation. The cultural distance and the country risk variable, when grouping solely as low and high, seem to have no significant impact on value creation either.