The effect of sulphur content on B20 fuel stability 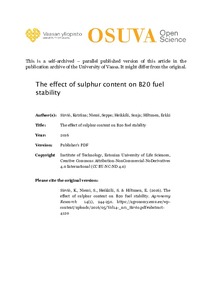 The aim of this study was to investigate if a high amount of sulphur is favourable for the fuel blends' storage stability. The parameters that correlate with the storage stability of the fuel blends were compared with two B20 fuel samples consisting of 20 vol% biodiesel and 80 vol% fossil diesel. The studied parameters were the oxidation stability (OSI), acid number and kinematic viscosity. The measurements were carried out straight after mixing the blends, and again after 4 and 9 weeks. One of the B20 samples was prepared from rapeseed methyl ester (RME) and fossil diesel fuel containing 6.6 mg kg-1 sulphur and the other from the same RME but the fossil diesel fuel contained 186 mg kg-1 of sulphur. According to the results of this study, the fuel containing less sulphur had slightly better quality during the entire study. Though, the OSI of the fuel containing more sulphur decreased less in percentages than it did for the fuel containing less sulphur. As a conclusion, the study gives a reason to assume that the sulphur may be favourable to fuel blends’ storage stability but it should be studied for a longer time to confirm this statement.