Ethical codes in local government : the problem of gifting. The views of Finnish concillors 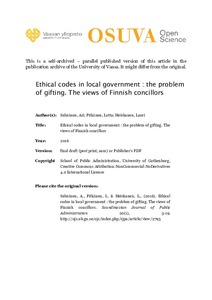 This article explores the purpose of ethical codes in Finnish local government and discusses topics such as the identification of codes and dilemmas, ethical awareness of gifting, the role of codes, and the need for codes. The data is based on the Councillor Survey. The respondents of the survey are members of Finnish municipal councils. The survey is targeted at the 200 biggest municipalities and was distributed to the councillors in November 2012. More than 5,000 individuals received the questionnaire, and almost 1,300 returned it. According to the results of the survey, recognition of ethical codes is low among Finnish councillors. The proportion of councillors who operate without the guidance of codes is remarkable. The councillors are aware what is and what is not acceptable in relation to gifting, and are convinced that they are capable of self-control when it comes to potential violations of integrity. Attitudes towards the role of codes are contradictory. The councillors want more detailed guidance. They nevertheless emphasise that codes should leave room for their own discretion. The need for more regulation by codes is stressed by the councillors. The codes should be targeted for specific issues and elected members should have their own ethical codes.