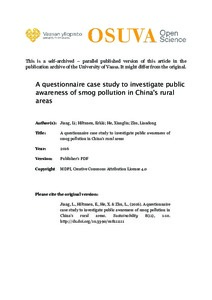 Smog pollution is one of China’s most pressing public health issues today and has therefore received significant attention worldwide. Not only cities but also villages in China are suffering from smog pollution, especially since 2013. However, there is limited information available about public awareness on smog pollution in China, especially for where it concerns the residents living in villages. Based on a questionnaire survey, this study aims to help fill this gap. The results of the study show that the income of the majority of respondents comes from working in the city, accounting for 31.6% of the total income. The percentages for respondents related to access to smog information from various channels are as follows: TV (28.5%), radio (24.2%), neighbors (13.5%), Internet (9.8%), newspapers (8.3%) and others (7.8%). As for attitudes regarding the severity degree and main cause of smog pollution, most respondents (33.7%) thought smog pollution in villages was somewhat severe, while 26.3% agreed that the main contributor to smog pollution was industrial emissions, followed by coal burning at power plants (20.9%) and vehicle emissions (17.7%). The results also indicate that most of the respondents were satisfied with the government’s performance in terms of smog control. However, 67.9% of respondents indicated they would remain silent and not intervene when confronted by an activity that causes smog pollution. This study can help to improve an understanding of public awareness regarding smog pollution in China’s rural areas and thereby activate positive public participation in smog pollution prevention and management in the search for sustainable development.