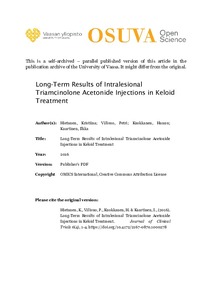 Background: Intralesional triamcinolone acetonide (TAC) injections are often used as the first alternative for treating keloid scarring. The long-term outcome of this treatment is unclear. Also, undesirable local side effects have been recognized in clinical work and literature but they have been labelled as harmless and rare. Methods: We documented the long-term outcome of intralesional TAC injections in the treatment of keloid scars in Tampere University Hospital. The main objectives were to investigate the remission rate and the occurrence of local side effects. We assessed 105 patients (46 women, 59 men) with 138 TAC treated keloid scars at the outpatient clinic. The keloids were photographed and assessed with Patient and Observer Scar Assessment Scale (POSAS). Results: Of the 138 keloids, 90 (65%) were clinically in remission. Local side effects, including atrophy of the skin or the subdermal fat, telangiectasia and cortisone traces, occurred in 55% of the cases. The number of injections did not correlate with remission rate or the occurrence of local side effect. ROC curve analysis showed that surface area >620 mm2 was a prognostic factor for not responding to TAC treatment. Conclusion: According to this study, intralesional TAC injections seem to be effective in the treatment of small keloids but not in larger than 620 mm2. Local side effects were more frequent than previously reported and occurred even after just 1 injection. The side effects seem to be permanent in nature.