Generalization of the Nualart–Peccati criterion 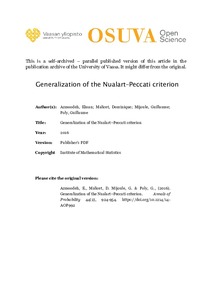 The celebrated Nualart–Peccati criterion [Ann. Probab. 33 (2005) 177–193] ensures the convergence in distribution toward a standard Gaussian random variable N of a given sequence {Xn}n≥1 of multiple Wiener–Itô integrals of fixed order, if E[X2n]→1 and E[X4n]→E[N4]=3. Since its appearance in 2005, the natural question of ascertaining which other moments can replace the fourth moment in the above criterion has remained entirely open. Based on the technique recently introduced in [J. Funct. Anal. 266 (2014) 2341–2359], we settle this problem and establish that the convergence of any even moment, greater than four, to the corresponding moment of the standard Gaussian distribution, guarantees the central convergence. As a by product, we provide many new moment inequalities for multiple Wiener–Itô integrals. For instance, if X is a normalized multiple Wiener–Itô integral of order greater than one, ∀k≥2,E[X2k]>E[N2k]=(2k−1)!!.