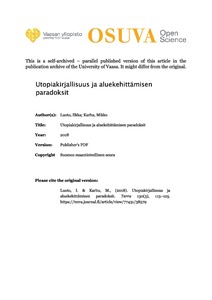 Bold plans and far-reaching openings demonstrate the increase in polyphony in the field of societal development. The use of imaginative visions suggests that utopia as a development method can be beneficial when solving complex societal problems. In this paper, we ask what the most recognizable and universal themes are that can be found in both the utopian literature and real contexts of regional development policy. Using the close reading method, we explored the three classic texts in utopian literature: Thomas More’s Utopia, Aldous Huxley’s Brave new world and George Orwell’s Nineteen-Eighty-Four. The study revealed four paradoxes of time, space, power and place that explain the nature of utopia as a place (topos) of non-existence and indicated that utopia itself is a major paradox. Ultimately, these are the same themes that create tensions and complications regardless of the period in time or the prevailing societal or regional situations. Despite being unsolvable, utopias and paradoxes can be useful for regional developers and policymakers who operate in the unexplored territories of the post-factual world. They show a way out of the maze by suggesting the simultaneous following of a number of controversial paths. Concurrently, utopias provide a glimpse of hope for situations where it is necessary to encourage, inspire and empower people to act for the common good of a region.