Profitability Ratios in the Early Stages of a Startup 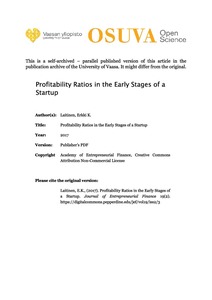 This study develops a mathematical framework to analyze the time series of profitability ratios in the early stages of a startup. It is assumed that the expenditure of the startup grows at a steady rate and generates a proportionally identical flow of revenue in each period. The profitability in terms of the internal rate of return (IRR) and the lag structure of revenue flows are assumed constant over time in describing the adjustment process towards the steady state. The startup is assumed to expense in each period a constant part of periodic expenditure and beginning-of-the-period assets. The adjustment processes of three kinds of profitability ratios are investigated: return on investment ratio, profit margin (as percent of net sales), and (traditional) cash-flow margin (as percent of net sales). It is shown that IRR, growth, expense rate, and lag structure strongly affect the early time-series behavior of profitability ratios. Thus, in the early years, due to unstable adjustment processes, profitability ratios are unable to reflect profitability (IRR) properly and can give distorted signals of the performance of a startup. These findings are supported by numerical analyses with the parameters estimated for a sample of 2608 Finnish startups classified into five clusters.