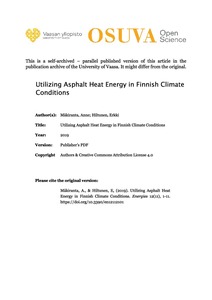 Geothermal energy is a form of renewable energy, which offers carbon-free solutions for heating and cooling spaces. This study evaluates the use of renewable asphalt heat energy in frozen ground conditions. Asphalt heat energy can be harnessed using a low-energy network, heat collection pipes and heat pumps. This study measured temperatures under the asphalt layer during a three-year period between 2014 and 2017. Measurements were made using a distributed temperature sensing method based on light scattering. Temperatures taken at four different depths under the asphalt (0.5 m, 1.0 m, 3.0 m and 10 m) are presented here. These temperatures are compared with that detected at the depth at which the temperature remains constant all year round. The temperature difference curve between 0.5 m depth and the constant soil temperature depth indicates that from April to October the soil at 0.5 m depth is warming and the temperature difference is positive, even as much as 18 °C. Instead, at the 3.0 m depth, the difference curve is smoother and it varies only from −5 to +5 °C. It is positive from June to November. The surface layer (0 m–1.0 m) is suitable for harvesting heat that can be stored in a deeper (1.5 m–3.0 m) purpose-built storage or in a bedrock heat battery. The calculated heat capacities indicate that asphalt energy, because of high temperatures, is a noteworthy renewable energy source.