Boundary Negotiations in a Self-Organized Grassroots-Led Food Network : The Case of REKO in Finland 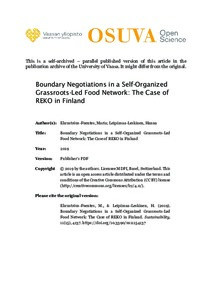 Self-organization is a term that is increasingly used to describe how engaged citizens come together to create sustainable food systems at the local community level. Yet, there is a lack of understanding of what this self-organizing activity actually means. While previous literature has addressed self-organization as an outcome of building consensus and a collective intentionality shared by the members of a group, we focus on the complex social processes involved when people with a diverse set of interests and motivations interact in the food network. In this study, we analyze what kinds of boundary negotiations emerge when grassroots-led food networks scale up. Our embedded single case study focuses on a REKO (‘REjäl KOnsumtion’, meaning ‘fair consumption’ in English) network in Finland comprising distributed local food groups and three types of actors: consumers, producers, and local administrators. We examine a conflict that arose within the REKO network in May–June 2016 when a small group of actors demanded that all local groups should implement similar rules, principles, and ethical standards. Our findings illustrate how moral, geographic, market, and power boundaries emerge in a self-organized grassroots-led food network. We further explicate the challenges that may appear within a self-organized grassroots-led food network, as it grows in scale and scope.