WHO OWNS THE NORTH POLE? Analysis of the territorial claims made by the Arctic states over the Continental shelf in the Arctic Ocean. 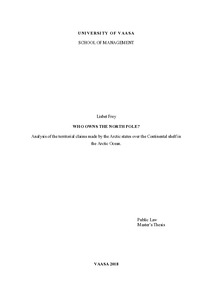 There has been a growing interest towards The North Pole and the Arctic Ocean Surrounding it in relation to the effects of the Climate Change. This region attracted the attention of the world media when the Federation of Russia sent down two submersibles in 2007 and planted a Russian flag in the Arctic Ocean floor, directly beneath the geographical North Pole. Soon, such headlines as “Who owns the North Pole?” emerged.

This thesis seeks the answer to the question: Who owns the North Pole? However, contrary to the head-lines of the world media this thesis seeks the answer to this question through State sovereignty. After the Russian expedition in 2007, four of the other Arctic coastal States followed with their territorial claims towards the Arctic Ocean seabed. Currently, Russia has an overlapping claim over the North Pole with the Kingdom of Denmark. Norway and Canada have also submitted their extended continental shelf –claims to the Commission of the Limits of the Continental Shelf. All of these claims are based on the Article 76 of the United Nations Convention of Law of the Sea 1982.

This thesis analyses the prevalent legal framework regulating these claims, the Arctic Ocean governance, and finally, the extent of State sovereignty in the Arctic Ocean.