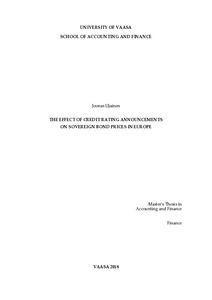 The purpose of the study is to examine bond characteristics, bond pricing and risks related to bonds. In addition, this study focuses on how credit rating announcements affect sovereign bond returns in Europe. First, we cover bond markets and the role of credit rating agencies in general. After that, the above-mentioned topics are combined, and the effect of negative and positive credit rating information on bond returns is analyzed. The effect of rating changes is examined by measuring abnormal returns over the period from January 2000 to April 2015.

On the grounds of total market value, bonds are by far the most significant asset class. It is worth mentioning that when global bond markets reached and exceeded an estimated $100 trillion milestone in 2013, the total value of stock markets was approximately three-fifths of the total value of the bond markets. Credit rating agencies play a major role in this vast bond market and have a substantial amount of power. Due to their role in financial markets and recurrent failures, it appears that arguments against credit rating agencies are partly justified.

To summarize, the empirical findings of this paper support the view that rating changes from investment to non-investment grade cause significant market responses. Furthermore, the results suggest that negative rating changes within speculative grade are associated with more pronounced price reactions than downgrades in general. Although downgrades appear to be insignificant rating events, findings based on a small sample indicate that positive credit rating announcements do have an impact on sovereign bond returns.