Foreign Currency Derivatives and Firm Market Value: Evidence from Unites States – Comparison of before, during and after Financial Crisis 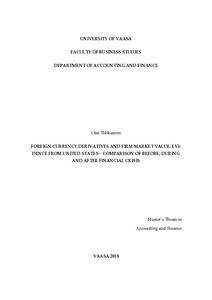 The latest financial crisis made markets more volatile and firms are associated with more risks globally. Firms have started to invest more resources in risk management and the use of foreign currency derivatives has grown during the last decades. Derivatives are used to protect firms cashflows and profitability. This thesis investigates the relation between foreign currency derivatives use and firm market value and compares the results in different economic cycles. The compared time periods are before the latest financial crisis (2004–2007) during the crisis (2008–2009) and after the crisis (2010–2013).

Motivation of this study is to clarify the inconsistent previous results and focus on the latest financial crisis. The study contains 894 firm year observations from big companies in US between years 2004 and 2013. Following Allayannis & Weston (2001) Tobin’s Q is chosen to measure firm market value. The use of foreign currency derivatives is manually picked from firms annual and financial reports.