3D Simulation and Virtual Reality as Methods for Conceptualization, Designing and Visualization of an Automated Lithium-Ion Battery Factory 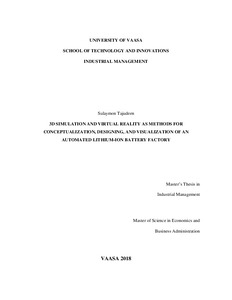 3D modeling and simulation have proven to be important methods when it comes to manufacturing process planning and conceptualization. With recent development in computer processing capabilities and Virtual Reality (later VR), 3D modelling and simulation methods for prototyping in manufacturing industry has become even more powerful when used together with VR for design optimization, realistic visualization, and information dissemination for everyone.

This research is part of a bigger research project at the University of Vaasa that utilized both experimental and case study research strategies to conceptualize an automated lithium-ion battery (later LIB) manufacturing factory simulation model that can be viewed with a VR headset. The VR glasses were used for optimization during modeling and it also helped with information dissemination of the simulation model for non-technical managers. A video of the complete simulation model was produced and a dedicated website that explains different stages of the automated LIB manufacturing factory using pictures and videos from the layout was developed as well. The entire 3D simulation was done with Visual Components software and a complementary VR software called visual experience developed by Visual Components Oy.

The results of this research show that 3D simulation together with VR can help any simulation engineer to effectively and quickly optimize simulation models in order to prevent future mistakes in real life projects, thereby reducing lead time and saving money.