Executive Coaching in the International Context 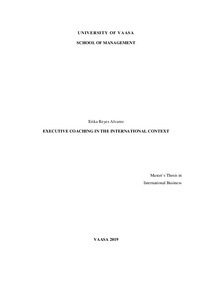 Executive coaching is a multidisciplinary concept and intervention that companies acquire in order to help the constant development of their employees as well as, to overcome problems in the workplace. This concept is normally confused and compared with therapy, training, counseling, mentoring and consulting from which the differences are established. Executive coaching has evolved more on the field than it has theoretically, meaning the theorizing of it is not as advanced as any other developmental theories.

In this research, the methodological approach used is a qualitative one. The method to collect the data is the use of semi-structured interviews with 10 executive coaches from around the world. After, the data collected is interpreted and contrasted to the previously established theoretical background to present an answer to the main questions of this thesis.

Among the main characteristics found, when working in an international context the coach must have high levels of self-awareness and openness and have lived in a different country to their own, among others. As for the process, this was the biggest finding because it stages an ‘extra step’ that is normally omitted when the cultural differences are minimum working domestically.
Finally, regarding the focus of the intervention, internationally, it deals with expatriation, stress-management, raising self-awareness and cultural differences management. There were no big differences found regarding the coacher’s traits, out-comes or frameworks.