Transformation of the Music Industry: Managing Marketing Channels in the Digital Age 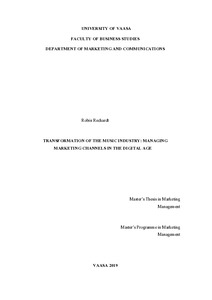 First there were CD’s, then came the iPod, iTunes, piracy and now there are music streaming services. But what do these have in common? They have all been disruptive forces affecting the music industry through digitalization, having different impacts on a number of different players, during different times. During the advent of each of these forces, they all came with the premise of destroying something that had been previously established in the industry and eliminating previously significant players in the process.

Most notably these claims were once again made as streaming services started to gain popularity. Now it was time for the record companies to step aside as distribution through digital platforms directly to the consumer coupled with previous disruptive forces meant that the stage had been cleared for anyone willing and able to produce a hit song. But as time has passed, these same record companies have now become music companies and some are stronger than ever, as is the entire industry that has experienced new growth for the first time in decades. But how is this possible? This research gap formed the foundation for this thesis as it raised questions about the overall adaptive measures undertaken by the companies, about what exactly had they had to face and most importantly, what marketing channel management activities had they implemented as a result of these disruptions.

As the effects of these forces are industry wide, effecting different types of companies, a multiple case study consisting of three case firms was conducted to answer these questions. The data was primarily gathered using semi-structured interviews and in order to produce a more comparative outcome, a cross-case analysis was conducted, allowing for more efficiency determining the similarities and differences between the companies.