The influence of digitalisation over the international marketing mix strategy. A case study in the footwear industry 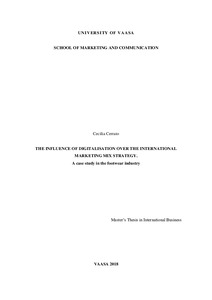 This study investigates the relationship between the two traditional approaches and the phenomenon of digitalization. More in detail, it found out what kind of impact digitalisation is having on these approaches, pointing out new trends that marketers should take into account to implement better international marketing strategies. The study focuses on the footwear industry, which is an interesting and dynamic sector, with good growth perspective and the analysis is based on the experience of three different footwear companies which have international activities. To gather information from these companies semi-structured interviews have been conducted. The sample included in the work is composed of three companies of different size and from different countries which all operate in globally or in many different markets. The main characteristic of these companies is related to the customization service they are offering to their customer.

The results almost reflected the expectation that the classical dualism of standardization and adaptation has been exceeded because today, due to the customer centricity, there is a persona perspective instead of the old market perspective, which is influencing all the international marketing decisions. Moreover, the results show that the degree of influence of the customization is higher than the one brought by big data, not because of the big data itself, but because companies are too small or still do not know how to use them in an appropriate way. This work helps to focus the attention on a topic which is not so studied, and it gives a better understanding of how companies should take advantage of digitalization.