Evaluation of SystemVerilog and Constrained Random Verification for Digital Designs 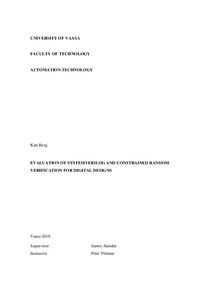 Technological advancements in the semiconductor industry have resulted in a continuous decrease in transistor sizes, which in turn has allowed for an increased transistor density in semiconductor devices. For Field Programmable Gate Arrays the development has led to increasingly complex designs, as an increased amount of programmable resources are available. Consequently, the time and effort spent in verification of the digital designs has increased. Discovering design flaws before end products are released is not only economically crucial, but a failure to do so might damage the reputation of a company. In this thesis current verification trends are evaluated in three case studies made for Danfoss Drives. The objective of the thesis is to determine whether the quality of testing of Field Programmable Gate Array designs at the company can be improved by using Constrained Random Verification and the SystemVerilog language. Test benches for behavioral simulations are built using SystemVerilog in conjunction with the Universal Verification Methodology.

Constrained Random Verification based on the SystemVerilog language and the Universal Verification Methodology was evaluated for unit level testing in two case studies for one Intellectual Property core. A third case study was made for a system level design of multiple Intellectual Property cores as a SystemVerilog test bench utilizing neither constrained randomization nor the Universal Verification Methodology. Improved test coverage and an increased degree of automatization was achieved for the unit level testing, although at the cost of an increased verification effort. In the system level testing the capabilities of the SystemVerilog language proved beneficial, especially for creating transaction level stimulus, writing self-checking mechanisms for the test bench and modularizing its structure.