Policy Implementation in International Organization: The Case Study of United Nations in Mozambique 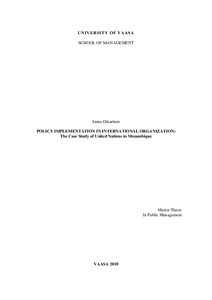 United Nations implements public and global policies in developing countries, in cooperation with local governments and other actors. In Mozambique, UN has functioned since the independence, 1975, and have had great importance in the reconstruction of the independent state after wars. Since 2008, UN Mozambique has gone through a reformation after “Delivering as One” initiative, which aims at integrating the UN activities in the county under the ONE UN organization. The joint efforts for the development of the country are collected under United Nations Development Assistant Framework (UNDAF), which determines the priorities and strategic direction. The study aims at identifying the approach the UN has to policy implementation and factors that affect the achievement of the goals in UNDAF 2017-2020.

Methods used in the study are qualitative and the data is collected among the UN officials in Mozambique by using semi-structured interviews. In addition, relevant UNDAF documents are used for studying the UNDAF implementation process. The data is analysed by using Mazmanian´s and Sabatier´s framework for the identification of the main factors that affect the implementation process.

Findings indicate that there are major challenges in the implementation of the UNDAF, and factors that affect the process are related to the coordination, leadership, commitment of the implementing officials and agencies, engagement of other stakeholders, monitoring and local socioeconomic conditions. Deduced from the main findings, for successful goal achievement, UN Mozambique should revise the objectives in UNDAF, improve coordination among the agencies and other actors, increase the participation of the civil society and develop effective communication and monitoring system among the agencies. Despite of the many challenges that UN Mozambique has in the implementation of UNDAF, there are strengths that enable corrections to be done; UN still has authority and clear mandate in the country.