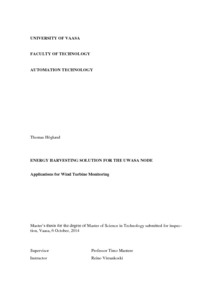 The aim of this thesis was to develop an energy harvesting solution for the UWASA Node for wind power station applications. Energy harvesting is the process by which small amounts of ambient energy is collected for use by electronics such as wireless sensor nodes. The developed energy harvesting solution is capable of supplying enough energy for the UWASA Node to perform a wide variety of tasks indefinitely, without the need for changing its battery. The wireless sensor node can for example read sensors at high sampling rates and store or wirelessly transmit these readings. It can also perform complex computations and react to changes in its environment. One intended use was monitoring vibrations of wind turbines blades, but field tests have yet to be done.

This master’s thesis builds on the findings of my bachelor’s thesis, Höglund (2014) in the references. In the bachelor’s thesis different methods of energy harvesting were in-vestigated to find the most suitable methods for this project. In this master’s thesis a prototype energy harvester and energy management circuit was developed and tested. The prototype is capable of harvesting tens of milliwatts from a small solar cell. It could also be modified to harvest another ambient energy source or several sources at once.

Every part of the energy harvester and energy management circuit is discussed in detail and laboratory tests are presented. Different means of maximum power point tracking were tested and evaluated. The prototype energy harvester was built using a modular approach so that energy harvesting from multiple sources of energy easily can be ac-complished by adding a few components for each source to the harvesting circuit.

The programming of the sensor node also needs to be adapted so that it runs optimally from the harvested energy by scheduling measurements and wireless communication. A low-power real-time clock and a latching switch were included on the prototype PCB for switching on and off the power to the sensor node completely in order to consume as little energy as possible when the sensor node is inactive.