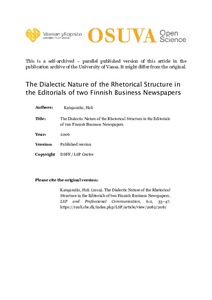 In this article is studied the potentially dialectical nature of the rhetorical structure in the 10 editorials of two Finnish business newspapers, Kauppalehti and Taloussanomat. In addition, it is also analysed the use of sources when presenting different standpoints in the editorials. The dialectical nature is approached as a continuity, where at one end is heteroglossia and at the other monoglossia. On the side of heteroglossia there is an editorial in which a writer is representing two standpoints and supporting both of them. In such a case the writer could be described to be uncertain and giving options. On the side of monoglossia the writer is representing only one standpoint, his own, and supporting it. Therefore, he could be described as a confident writer who does not give any options. Based on this case study it is possible to claim that the writer prefers to exclude opinions contesting his own. Sources are used mainly to support the writer’s own opinions. To all appearances, there is no need for the editor to give the impression of being impartial. The writer prefers to make the choice of being certain (and subjective) to giving an impression of possible conflicts. One reason for this might be the subject matter of the editorials. The other reason might be that the editorials comply to hegemonic ideologies, or at least ideologies shared with the assumed readers.