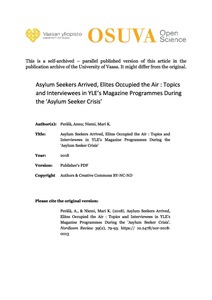 In this study, we examine the choice of interviewees and discussion topics made by Finland’s national broadcasting company YLE during the so-called “asylum-seeker crisis” of 2015 and 2016. The rapid increase in asylum-seekers, combined with deepening political tensions regarding the situation and the entry of a populist anti-immigration party into government, created a challenging environment for the media. This was especially true for YLE, which is committed to political neutrality and cultural diversity. Our data shows that the “crisis” was framed as a crisis hitting Finland and European decision-making rather than as a humanitarian crisis. Despite long-term academic criticism of bias in expert interviewee selection (e.g. the underrepresentation of minority and female interviewees), the media continued to use traditional sources of knowledge. However, in a novel approach for Finland, the media engaged the large-scale involvement of politicians, and especially representatives of the populist Finns Party.