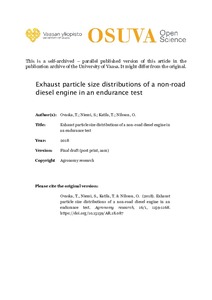 The main objective of this study was to find out how the non-road diesel engine running period of 500 hours affects the exhaust particle size distribution. By means of an engine exhaust particle sizer (EEPS), particle number was measured before the endurance test and after 250 and 500 hours of engine operation. The size distributions were determined at full and 75% loads both at rated and at intermediate speeds. The soot, gaseous emissions and the basic engine performance were also determined and lubricating oil was analysed a few times during the running period. A blend of low-sulphur fossil diesel and soybean methyl ester (B20) was used as fuel in the 4-cylinder, turbocharged, intercooled engine which was equipped with a diesel oxidation catalyst (DOC) and a selective catalytic reduction (SCR) system. All emissions were measured downstream the catalysts. During the 500 hours of operation, the particle number increased considerably within an approximate size range of 7 to 30 nm. Between the initial and final measurements, no notable differences were observed in the particle number emissions within a particle size range of 50 to 200 nm. The copper content of lubricating oil also increased significantly during the 500 hours’ experiment. One possible reason for the substantial increase in the nucleation mode particle number was assumed to be copper, which is one of the metallic elements originating from engine wear. The engine efficiency was almost equal, and the differences both in smoke and hydrocarbon emission were negligible throughout the 500 hours’ experiment.