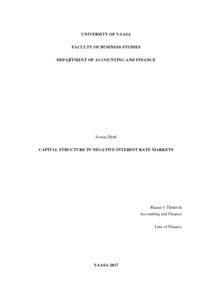 This study examines the development of firm capital structures in European negative interest rate markets. This kind of new market phenomenon has not been occurred before in Europe, thus creating an intriguing opportunity to inspect empirically its effects on corporate leverage. One of the main goals of negative interest rates, by the central banks that have set it, is to promote bank lending to companies so they would invest more, hence creating a positive cycle in the economy. This is also one perspective in the study, and it is important to measure if these actions have really had the desired result.

This paper covers the main previous theory and literature regarding trade-off and pecking order theories on capital structure. Aggregated deficit model is used to investigate pecking order theory, whereas conventional leverage model and dynamic partial adjusted model are used for trade-off theory. The data consists all listed public companies in Denmark, Sweden, Switzerland and the 500 largest companies in the Euro area from year 2007 to 2015.

The empirical results give mixed evidence regarding both pecking order and trade-off theory. Trade-off theory is better supported than pecking order theory considering fast adjustment to target leverage by the dynamic partial adjusted model and pecking order model not giving proper support for the after-mentioned. However, the evidence strongly supports that leverage started rising during the period of negative interest rates.