Emotions and Mood in a Workgroup 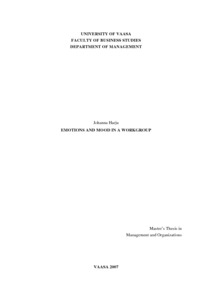 This thesis studies the meanings of emotions and mood in a work group. The objective is to understand their roles in everyday working life and how they might affect the employees. In the beginning of the research no assumptions about the results were made. The idea was simply to “dive in” to the phenomena and receive what is to be found.

The research was carried out in an international company, where two teams were interviewed in winter 2006-2007. The pilot team was multicultural and the comparison team, domestic. Both teams are formed quite recently and contain people of different ages and with different backgrounds. The methodology of the study is qualitative and it was conducted by following the structure of the grounded theory–method. The data was collected with open interviews and diaries. The attempt was not to influence the interviewees, but to let them talk freely about emotions, moods and matters that have meaning for them at work and at home. After each interview the data was coded and analyzed to give a guideline for the next interview. This way all the discussed themes came directly from the interviewees and not from the interviewer.

After the interviews, a more careful analyze was made and the main results were found. It was obvious that emotions and mood have a significant role in the social life of the organization. They seem to affect the mood of other team members and moreover the work itself. From the rich data of the interviews more interesting elements were found explaining how different matters affect different people in dissimilar ways. The results from the two teams did not differ strongly from each other, only the intensity of their attitudes diverged.

The results can be eventually combined together with the existing literature, which gathers together the most important emotion studies in organizations. Supporting findings could be covered from the literature and thus it could be seen that this thesis gives confirmation to the previous studies. The contribution of this study is that it provides tools for organizations, which can help waking up the awareness inside the teams, making the team members to understand each other better and make them want a change for the better.