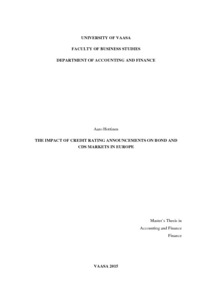 A fixed effects panel data regression is used for the analysis. The results for the first analysis show that the bond and CDS markets are not totally efficient. As the previous studies have proven, in general, the negative credit rating announcements have an impact on bond and CDS markets.