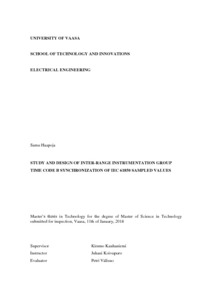 Distribution substations are an important part of a chain which delivers energy from power production to customers. They transform the voltage level from transmission levels, usually 35kV and up, to distribution levels ranging between 600 and 35000 V. Recent developments in the instrument transformer field have been toward low-power solutions which use digital measurement values called sampled values in place of analog voltages and currents in substations.
The IEC 61850-9-2 standard and its implementation guideline 9-2 LE by the UCA international users group define an interface for sampled values. This interface is used between an IED and LPIT. The main requirement of using sampled values is accurate time synchronization in order to prevent phase misalignment resulting in unnecessary protection function tripping. 9-2 LE defines two methods for synchronization: 1PPS and PTP. Today, PTP is widely used in the western markets, but due to costs associated with PTP-capable GPS clocks and Ethernet switches as well as vendor inoperability problems, some markets are hesitant to take into use. The purpose of this thesis is to propose a solution to this problem: use IRIG-B as a synchronization method in a PTP grandmaster.
This paper discusses the differences between these two time synchronization topologies, associated costs, disturbance handling, accuracy and it also discusses the design of IRIG-B to PTP conversion done in a bay-level device. The device acts as a PTP grandmaster but the source comes from an IRIG-B clock instead of a GPS PTP grandmaster clock. The results shown in this thesis demonstrate that using IRIG-B as a main or redundant source in synchronization of sampled values is a more cost-effective option, especially if the station is to be retrofitted with sampled values configuration. The proposed bay level device also maintains the desired accuracy levels of ±1 µs set by IEC 61850-5.