Evaluation of Reforms in Turkish Public Administration After 1980s 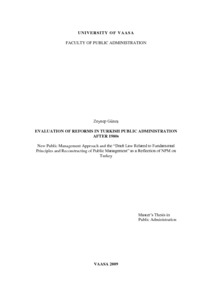 Administration is the most tangible part of government and since 1980s, mostly because of the fiscal and economic crises, experiencing a revolution. Traditional Model of Public Administration is criticized because of its being awkward, inefficient, ineffective, and full of procedures and bureaucracy. It is the common estimation that traditional model is unable to answer day‟s needs and demands of citizens. Thus it is accepted that public sector mechanisms need to change.

New Public Management is the new paradigm, which replaced traditional model and seen as a global phenomenon and claimed to be solution to the problems caused by traditional model. This new approach‟s techniques and practices drawn from the private sector and its‟ most important key elements are; decentralization, market type mechanism and competition in public sector together with increasing emphasis on performance, outputs and customer orientation. This study concentrates on this respective transformation and intended to draw attention to the main lines of it.

The NPM approach spread all over the world and one of the most important assumptions of this new model is that it is universally applicable. Most of the countries are experiencing reforms since the emerging of NPM approach in order to improve their public sectors.

The main goal of this thesis, by combining theoretical and empirical analysis coordinately, is studying two models in detail and questions NPM‟s applicability to Turkey. It is argued that management change in public services and introduction of imported methods may be more to do with cultural factors, administrative habits and characteristics that are embedded in the form of public administration of that country.