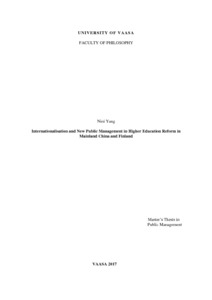 In the past three decades, many changes alongside with the globalisation occurred. The global trend promoted the global education movement, which stood on the outcome-based education reform, and then the movement evolved the education systems with the management thoughts of low cost but effectiveness education and high quality. Meanwhile, the international activities among higher education systems became more active; transboundary academic service from universities had been delivered rapidly. The scope of the mobility of students, scholars, and teachers became wider, more educational structure and culture networking transported and cross-border academic collaborated.

The current research explores the higher education reform in mainland China and Finland in the past decades, it has tended to examine closely about the structure reform in the two different social systems, which were under the influence of the globalisation, internationalisation and New Public Management. Furthermore, to find out convergences of the reform between the two nations. The research applies qualitative research method. The qualitative content analysis presents the two higher education systems’ distinct reform process and reform contexts along with the line of globalisation, internationalisation and New Public Management, which answers the how-research questions. Later the research displays the findings and convergences by exhibiting the policies and practices in universities’ administration.

The results of the study manifest the internationalised universities in both countries are heavily transformed by globalisation. The market-oriented higher education institutions, modified administration structures and highly autonomous universities governance in both systems are the products of New Public Management.