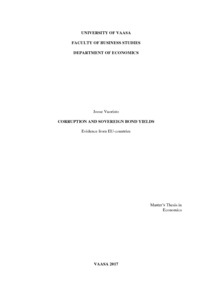 Corruption, the misuse of entrusted power for personal gain, is a complex phenomenon which has existed since the beginning of human civilisation. Regardless of this, there are relatively few studies analysing the costs associated with corruption, especially in developed countries. Most previous studies on corruption have focused on its effect on the economies of developing countries.
The aim of this study is to find whether or not there is a relationship between the prevalence of corruption and the price at which a country can borrow money. With rising national debt and increased spreads in interest rates between countries caused by the European sovereign debt crisis, the cost of debt is currently a relevant issue for all EU countries. This question is examined using a Driscoll-Kraaye pooled OLS regression to test whether there is a statistically significant correlation between the Corruption Perceptions Index (CPI) score and the sovereign bond yield of a country when major macroeconomic variables are controlled for. Furthermore, the regression is performed both on the entire data, which covers 27 EU countries across 1995-2016, as well as separately for the periods before and during the global financial crisis and for two groups of countries based on when they have joined the EU.
The results, which are highly statistically significant, indicate that corruption was linked with sovereign bond yields in all of the regressions performed, regardless of the period or group of countries analysed. Additionally, the correlation between corruption and sovereign bond yields was stronger during the financial crisis than before it, especially in older EU countries. These results imply that corruption is not merely a moral issue for EU countries, but also a source of significant costs and an issue which needs to be addressed. These finding are in line with previous literature which has found corruption to have notable negative effects on the economies of countries.