Alcohol Policy in Italy and Finland: A Comparative Perspective 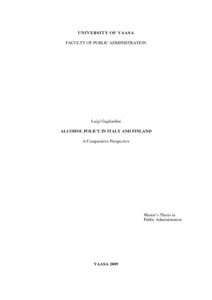 The consumption of alcohol is often a burden for the society due to the negative effects it provokes and the consequent direct and indirect costs it causes to governments. On the other hand, alcohol is also an ordinary commodity which has been present in many cultures for centuries. Today, governments can engage the problem of alcohol in relation to excessive consumption with alcohol policies formed by different instruments aimed at limiting its detrimental effects.

In this research, public policies are considered as means for the safeguard of the public health. The method used is characterized by a comparative analysis of Finnish and Italian alcohol policies drawn from four sub-categories of policy instruments: market restrictions, market regulation, marketing control and environmental control. Therefore, alcohol policies are studied under a regulative point of view by describing the policy actions undertaken by Italian and Finnish governments. Laws and regulations are the most powerful instrument governments can use in order to pursue its values and alcohol policies are regulative in nature in the sense that their implementation strictly depends on the promulgation of norms aimed at imposing a certain behavior on the citizens.

The research shows that Italian and Finnish social contexts in which alcohol policies are implemented are not equal. Finnish drinking patterns provoke relevantly higher direct and indirect costs. Issues related to alcohol consumption are also perceived differently in Finland and in Italy, both by citizens and governments. As a result, Finnish alcohol policy is relevantly stricter than the Italian. In both cases however, government behavior seems to give into national culture although actions and inactions are motivated by different values. In this respect, the cultural variable as well as other socio-economic factors play a crucial role in defining the behavior of both the government and its citizens, notwithstanding scientific acknowledgment about the effectiveness of certain policy instruments. Also, in spite of noble declarations, public health motivations are usually the weakest in influencing alcohol policies in both the cases of Italy and Finland.