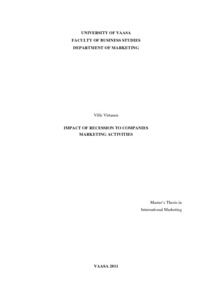 Recession is interesting and multidimensional phenomenon, which has been on the headlines lately. Phenomenon has been studied earlier and the consequences of it have been target of interest for business and academic. Purpose of this study is to explore that Will companies change or adjust their marketing activities due to recession to survive better from it?