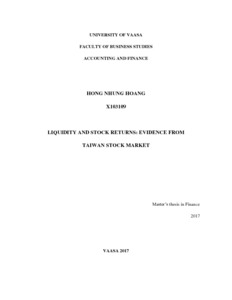 This study investigates the relationship between liquidity and stock returns in Taiwan market over the period of 2007 to 2014. The study’s major contribution to literature about liquidity is the concentration on an active emerging market where attracts an increasing amount of inflowing funds. Both Fama – French model and CAPM Three Moment model augmented by liquidity factor are utilized in the test. Simultaneously, this paper also examines if during January and the period before and after New Lunar Year holiday, the most important cultural event that might vastly affects trading behaviors, the above relation would vary or not.
The empirical finding suggests that there is a positive link between illiquidity ratio, which is proxy for liquidity level as on the line with Amihud’s paper (2002), and stock returns in Taiwan market. However, during January, the effect of liquidity on stock returns disappears, while during period around New Lunar Year holiday, liquidity impact is still figured out, yet its extent is eroded. Therefore, it is suggested that during these special occasions, other factors not addressed in this study have greater impacts on stock returns and they absorb a part of liquidity explanatory power.