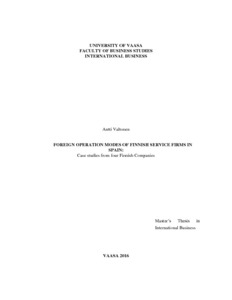 The research is a multiple case study. The primary data has been collected by interviewing eight managers from five organizations. The secondary data has been collected via online sources, including, most importantly, the company websites. The research aims to investigate how the Finnish hard service companies’ operation mode decisions have affected to their achievement of their primary objectives. The study includes cases of four Finnish hard service firms, which operation time in Spain varies.

The findings of the research suggest that the Finnish hard service companies should establish a wholly-owned subsidiary to Spain if aiming to increase their global market share and profit, like the case companies aimed. The Spanish business culture requires knowing the local language and business practices in order to be reliable in the eyes of the customer. Still, the founding of the wholly-owned subsidiary should be conducted carefully, and the market potential tested by entering the country by exporting.

By founding a subsidiary to Spain, a Finnish hard service company may gain benefits also for their operations outside of Spain. In Spain well-educated and relatively low-cost workforce is easy to hire, which can benefit the operations in other countries as well. In addition, Spain can be used as a headquarters to enter the markets of Latin America.