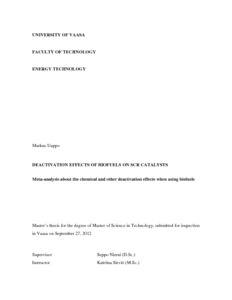 The SCR catalysts can lose their activity over time. This deactivation may be due to too much heat, pore blocking or chemical poisoning. Many biofuels can contain trace elements and ash that may accelerate the deactivation. Biofuels are solid or liquid fuels that are made from renewable biological sources. In this thesis some information from power plant and engine testing, as well as laboratory scale testing is gathered in order to understand the deactivation process.

Potassium has the strongest deactivation effect by itself and with other components. Sodium, calcium, magnesium and phosphorus are also found to be harmful, but their effects are more dependent on the compound and the presence of other poisons. Basically all alkaline and earth alkaline metals are harmful. The main reason for deactivation is the aerosol poisoning that chemically decreases the ammonia absorption on the catalyst surface. The less ammonia is absorbed the less conversion will happen inside the catalyst. Pore blocking and blocking the inlet of the catalyst by ash are much less harmful deactivation methods.