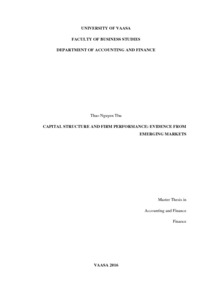 This paper investigates the impact of financial leverage on firm performance measured by ROA and ROE in publicly traded enterprises amongst the selected emerging markets, including Brazil, Russia, India and China. Additionally, the study also examines the association of debt equity choice with firm efficiency during a period of extreme distress which is noticeably thought-provoking when considering the emerging markets since debt markets were concerned to trigger for the financial crisis of 2008 penetrating the emerging economies.
This study employs data on large, publicly listed companies from the four largest emerging economies including Brazil, Russia, India and China in the period from 2003 to 2013 to observe the effect of financial leverage on firm performance. The thesis investigates whether firm performance is affected by debt equity choice and this relationship if exists persists the same during economic downturns or periods of extreme distress.
Empirical results reveals that financial leverage has significantly negative impact on firm performance in tested markets. However, during economic turbulence, this relationship varies from countries to countries. While China and India show that the link is more adverse during recessions, Brazil witnesses a contrary picture when higher level of debt facilitates firm performance during economic downtrends. Russia suggests insignificant relationship between leverage and firm performance measured by both ROA and ROE. Concerning firms experiencing financial distress, the test provides mixed results amongst economies.