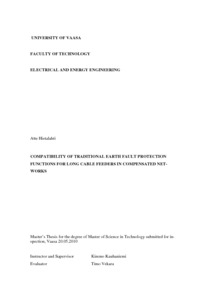 In January 2005, the storm Gudrun hit the south of Sweden. More than 20 000 kilometers of distribution lines were damaged during the storm. As a result of the Gudrun experience and forced by the new compensation regulations, the distribution network owners had to answer to new demands of electrical distribution. Several of them in Sweden plan to, during a near future, replace numerous of rural overhead lines by underground cables. As a consequence of this development, HV to MV-substations will consist of more and more of large cable networks, where individual cable feeders can be tens of kilometers long. The extensive use of underground cable involves significant increase of the capacitive earth fault current. In networks with long radial cable feeders, this also leads to increased active losses, as the active earth fault current contribution drastically increases. Generally, the increased resistive component makes the management of earth faults more difficult because this component cannot be directly compensated like the capacitive component.
The primary aim of the thesis is to investigate the performance of the traditional protection functions, which are available in modern feeder protection relays and terminals. Investigations will be run in 10 kV compensated networks with large resistive earth fault current component. These protection functions include phase angle criterion-, Icos(φ)- and Wattmetric- functions. As a novel earth-fault protection function, neutral admittance- based earth fault protection is also included in the study. Each protection method is studied separately, and its suitability to this application is evaluated. This evaluation is based on performance considerations such as overall selectivity, sensitivity, suitability of settings and their ranges, and the effect of network changes on the directly compensated networks.
During the simulations, all protection functions showed rather good performance. In the ranking, the best method was neutral admittance, then Wattmetric, Icos(φ)- and base angle criterion. Superiority of the admittance method is explained by its systematical way to identify earth fault and flexibility for different feeder lengths.