Rights and Fairness: A Cross-Cultural Analysis of the Representation of Gender Relations in Marriages in Vietnamese and British Online Comments 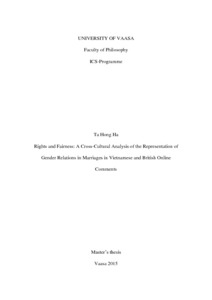 Many researches have been conducted with the motivation of discovering a precise definition of gender equality (Beveridge & Velluti 2008; Verloo 2007). However, this conception depends on many factors relating to specific features of each society, and it also changes over time. After thousands of year of patriarchy, starting from the 19th Century, with the emergence of feminist theory in Europe, debates endure over women’s right and equality in every essential aspect of society.

Even though women’s position in society and family has improved, the long period of patriarchal ideology still has its influence, especially in developing countries where the feminist movements were formed later than in Europe. Women in developing countries are still fighting for their rights while many women in developed countries have gained decisive achievements. In addition to that, each culture possesses its own perspective on specific phenomena, and these perspectives differ when we consider complicated issues, such as gender.

This study therefore seeks to examine how people in different cultures perceive their gender roles and how their percipience influences their action by analyzing online comments under articles about household chore division in two tabloids. The first tabloid is from Vietnam (www.afamily.vn), a typical developing country; the second one is from Great Britain (www.dailymail.co.uk), one of the leaders of feminist movements.

By combining qualitative content analysis by Mayring (2000), the analysis of cultural models as developed by Paul Gee (2008), with a stylistic analysis by Arp & Johnson (2009), and comparative research methods by Brislin (1976) the research not only demonstrates how gender and gender relation are constructed in different cultural contexts but also discloses different conceptions of gender roles in both the Vietnamese and British comments. Apparently, ultimate masculine power in the past still impacts on the conception of gender roles in both Vietnamese and British case and makes men resist sharing domestic chore with women. However, the needs of women are not really a fair share but actually being respected and appreciated by their partner for what they have done.