The Impact of the Internet on the Public Sphere and on the Culture Industry. A study of blogs, social news sites and discussion forums 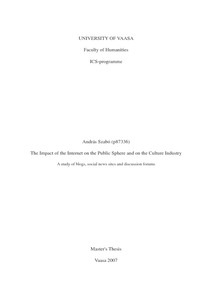 This thesis analyses how certain services of online communication (blogs, discussion forums, social news and bookmarking sites) contribute to the public sphere and to the culture industry.

The concept of public sphere is derived from Jürgen Habermas' idea that political power can only be legitimate if it is applied in accordance with the best, common interests of the society – but these interests can only be crystallized in discursive debates between members of the society. However, contemporary national public spheres are said to be distorted and detached from real interests of citizens. The internet, through offering the possibility of democratic and reflexive communication, holds the potential of improving the state of public spheres.

The concept of culture industry holds that the capitalization of the production of cultural products (i.e. works of art) rids societies of authoritative art, the one channel through which real individual freedom can be established. “Culture industry” is instrumental, through the promotion of consumption, to the capitalist domination of a few over masses. This, in turn, affects the general state of the public spheres. Once again, the internet has the potential to democratize this over-encompassing culture industry, through increasing cultural diversity via its several new channels of information and distribution.

The analysis of blogs, discussion forums and social bookmarking and news sites confirms the democratic potential inherent in these services, but it also points out certain problems that hinder the actualization of this potential.

It is established that the use of the generalizing category of “blogs” is misleading, because of the fake underlying dichotomy of “blogs vs traditional media.” The large, fragmented and asymmetrically interlinked (small, influential core and large, extremely fragmented periphery) totality of blogs is found to be contributive to the public sphere mostly as an alternative and very fast channel of information dissemination.

The role of discussion forums is found to be ambiguous, certain forums being absolutely irrelevant, while others establishing powerful advocacy media and global issue publics.

Social news sites are found to be potentially most constructive from the point of view of the public sphere, because they tend to effectively promote reasoned argumentation.